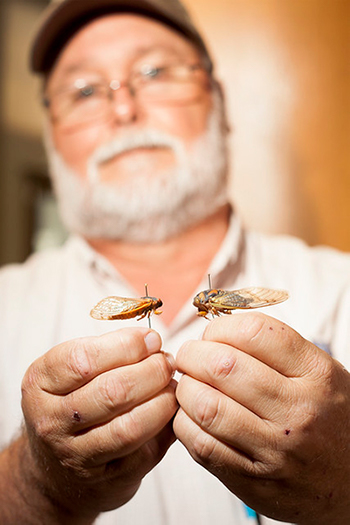 The University of Arkansas provides arthropod (arachnids, insects, etc.) identifications to individuals, businesses, schools, colleges, and government agencies. This service is provided free of charge for single specimens and small samples. A consulting fee will be charged for identification of large numbers of specimens and samples.

It is often possible to satisfactorily identify specimens from high-quality digital photographs. Photographs should be emailed to museum@uark.edu.

Include a note describing where and when the specimen was found, what it was doing, and why it is of interest to you. Also include your name, address, telephone number, and email address.

Most specimens – those with relatively hard bodies – can be killed by placing them in the freezer for a few minutes. Wrap them gently and loosely in tissue paper and place them in a small box, vial, or other sturdy, crush-proof container.

Soft-bodied specimens, such as caterpillars, grubs, and other immature arthropods, can be killed by placing them in hot water. Bring a small pot of water to a boil, then remove it from the stove and drop the insect into the water. Remove it after a few seconds have passed. Usually, no more than one minute is required. Place the insect in a vial of alcohol.

Spiders, ticks, and many other arthropods can be dropped directly into a vial of alcohol.

Mail physical specimens prepared according to the above directions to the Department of Entomology, Attn: Museum Manager, 465 North Campus  Drive, AGRI 319, Fayetteville AR 72701.